How to Find "Lost" Items in Google Drive

In my previous post I shared directions for uploading files and folders into Google Drive. In that post I also described how I loosely organize my files in Google Drive. If you're like me and also have a very broad interpretation of "organize," you'll want to use search function in Google Drive to find your old files. I use the search function to search according to keyword and filetype within my account. When I do that I can usually find what I'm looking for fairly quickly.

In this short video I demonstrate how I use the search functions in Google Drive to find files whose names I can't remember ten years after I created them.

How to Move Desktop Files and Folders Into Google Drive 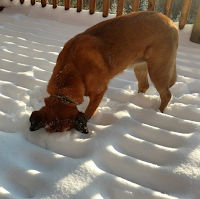 I organize my files into a handful of big folders according to units that I teach throughout the year. I don't do this, but some people that I've worked with create sub-folders with unit folders. Those sub-folders are then labeled with things like "quizzes" or "group projects." The structure that you use for folders isn't as critical as it used to be because you can always use the search function with Google Drive to search for the file you need (as long as you can remember what you called it).

What is a DDos Attack? - A Simple Explanation

Were you one of the millions of people frustrated by Google services like Classroom and Gmail being down earlier today? If so, and you turned to Twitter to see who else was talking about it, you may have noticed that #DDoS was a trending topic as people speculated that perhaps Google was the victim of a DDoS attack. (So far Google has not given an explanation of what caused the outage).

I had one student in my classroom this morning and the rest were virtual. Since I couldn't reach my virtual students I scrapped this morning's lesson plan and talked with my one in-person student about network and data security. We ended up spending a good bit of time talking about DDoS as it was a trending and relevant topic for my class. Specifically, we did a lot of speculation on the various ways a DDoS attack might get started.

If you're wondering what the heck a DDoS attack is and why it would be relevant to all users of cloud-based services, take a look at PowerCert's animated explanation of DDoS. It's one of the best "non-techy" explanations I've found.

Update: 10:45am ET Google released a short statement about the outage. It was not related to a DDoS attack.
at 9:46 AM
Share
‹
›
Home
View web version